The second “Friends of Viborg” award was presented to the descendants of Charles Jorgensen and Cena Glood as part of the 111th annual Danish Festival Days activities held July 16, 17 & 18 2004 in Viborg.

Hans Karl Jorgensen, he would later change his name to Charles Jorgensen Glood, was born February 20, 1872 at Kleis, pr. Horsens, Denmark, and died December 28, 1948 at Viborg, South Dakota. Hans Karl graduated from boarding school in Sakanderborg, Denmark in 1890. He immigrated to America in March of 1892, at which time he changed his name to Charles Jorgensen Glood. He worked at various jobs including that of blacksmith in Daneville and he worked at the Sioux Falls-Yankton and South Western Railroad, later became the Great Northern Railroad, construction camp located 3/4 mile southwest of Daneville. In 1893, Viborg was established about 1/4 mile northeast of Daneville. At that time, C.J. Glood and partner, Charley Nelson, started a small hardware store. C.J. sold his share to Charlie’s father and moved to Cedar Rapids, Iowa in 1894 to seek employment. Here he met and married Cena Andersen on October 31, 1897. His parents were Rasmus Jorgensen and Jacobine J. Hansen. They were both born in Denmark and later immigrated to America and settled in the Viborg area. They farmed for 16 years and then retired to their home, which is still standing, on the northwest corner of North and Blaine Streets. 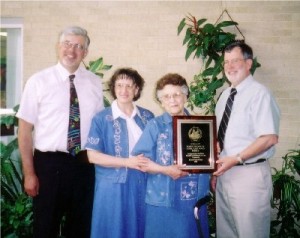 Larsine (Cena) Andersen was born August 28, 1875 in Plano, Illinois, and died July 28, 1961 following a United Airlines plane crash in Denver, Colorado. Cena’s parents were Lauritz Hoyer Andersen and Maren P. Larsen. The Hoyer Andersen’s retired in Viborg in 1916 and built a barn and house at the corner of North and Hoyer Streets. These streets in Viborg were named after them.

C.J. and Sena Glood took great pride in Viborg. The land for the original city park was donated to the city by the Glood’s. At various times through the years C.J. was a member of the Viborg City Council, the Viborg School Board Swan Lake Improvement Association, Masonic Lodge, Danish Brotherhood Lodge and I.O.O.F. Lodge. Cena was a member of the South Lutheran Ladies Aid, Danish Sisters Lodge, Legion Auxiliary, Eastern Star and always helping at school functions.

The descendants of C.J. and Cena also played a role in establishing Viborg by building the Viborg Motel and the building currently occupied by the Ward Law office. They also build several homes in Viborg.

The descendants of C.J. and Cena Glood were honored at the Leadership Luncheon at Noon on Friday, July 16, 2004 at Pioneer Memorial Hospital. On Saturday, July 17 at 3:00 PM, there was a public reception held for the Glood family at the Daneville Heritage Association Museum. The dedication of the museum took place at 3:30 PM. The Glood family was officially honored with the “Friends of Viborg” award at the closing ceremony at 8 PM on Sunday, July 18, 2004.