The “Friends of Viborg” award was established in 2003 to honor a person, family, organization or business that has made a big difference in the history of Viborg.

The Danish Vikings Days committee is proud to announce that our local drug store has been selected to receive the 2017 “Friends of Viborg” award. This year’s theme is “A Prescription for Fun!” The award will be presented at Glood Park on Friday, July 14, 2017 at 7:30 pm. 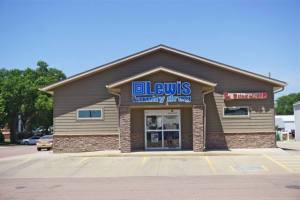 Most small communities aren’t fortunate enough to have a drug store.  Less can claim to have kept one.  Viborg has, and that is one of the reasons that the Danish Days Committee has selected to honor Lewis Family Drug as the 2017 Friend of Viborg.

When researching the history of our local drug store, I was amazed and surprised at all the pharmacies who have set up business in Viborg throughout the years.

People with roots to Viborg most likely link our local pharmacy to the Keller Family.  In 1894, one year after the Village of  Viborg was established,  James Keller opened the young city’s  first drug store,  named “The City Drug Store”.  James passed away at the young age of 49.  In 1906 Clyde Keller, son of James Keller, purchased the stock and fixtures from M.R. Odell.  No information has been recorded on M.R. Odell, so little information is known about him.  The location of that store is just to the east of our current drug store.  A few years later the store was moved to where the old Legion Hall was located and the drive up lane of our current drug store.

In 1913 Clyde moved his store into a new building on Keller’s Corner, where the Daneville Inn is now located.  This was the pharmacy location on Viborg’s 4-way stop that is well remembered by many.   Clyde served the community for many years until his death in 1948.  He became so much a part of the community that he learned to speak the Danish language.H.H. Cook opened “The Corner Drug Store” in 1898 sharing a building on the SW Corner of Main Street and Park Avenue with the Scandinavian Ntl. Bank.  The two story wood frame building was moved over one lot to  west to make room for a new brick bank building (which still stands there today).  H.H. Cook sold out to Hurley man, George Phillips in 1909.  This was eventually sold to brothers, Edward and Ralph Allen. This same building was home to a men’s clothing store operated by H.M. Andersen from 1920- 1940.  It was then turned into to the Viborg Post Office from 1940-1969.  The Seniors Citizens operated out of the building until it was tore down by J. Merle Peterson who then constructed the building which has been the home to Stitching Sisters.

Brothers, Edward and Ralph, operated the “Allen Bros. Drug Co”.  Edward sold his interest to Ralph and moved to California because of poor health. Ralph moved the business from the south side of Park Avenue to the north side (where the  Viborg community food pantry is now located).   A second store, a Variety Store was opened by Allen just east of their drug store.  Tragedy struck when both stores burned down on November 28, 1928.  All the Christmas stock had arrived but insurance was not effective until December 1st.  Ralph was encouraged to take bankruptcy, but he had no interest in doing so.  He paid for every cent.  He tried to collect on charged accounts, but that proved very difficult.  The Allen family chose not to rebuild and they moved to Yankton.

In 1938 Keith Keller formed a partnership with his father and after his father’s death in 1948 he became the sole owner of Keller Drug.  In 1958 the Olsen Hardware building was purchased and a gift shop was opened in conjunction with the drug store.  Keith was the fourth generation of Keller pharmacists in South Dakota, beginning with his great grandfather Matthew Keller, who owned a drug store in Canton in the 1870’s.  Through the years the motto of Keller Drug was “in Business For Your Health.”

Almost immediately the Devitts’ began to remodel the drug store and add a more complete line of merchandise to provide the area with better health care and variety needs.

In 1978 the Devitts doubled the size of the selling area and started to run promotional sale flyers on many different items to encourage area shoppers to shop in Viborg rather than drive to Sioux Falls or Yankton.

Al Devitt was the consultant pharmacist for Pioneer Memorial Hospital in Viborg.  His wife Beth ordered the store merchandise and was the store bookkeeper.

In 1980 the Devitt’s purchased the drug store building from Keith Keller.  As the building was in need of repair, the Devitts started to remodel both inside and outside.  A new stucco front and new doors were added to the sales floor thus a craft and software section and housewares section was added to the store.  In 1984, when Westra Implement went out of business.  The Devitts purchased the implement building and immediately began remodeling and expanding the store size for the third time.  This addition brought its final size and was considered one of the areas most complete modern pharmacies.

In 1986, the Devitts tore down an old additional to the drug store building that in the “old days” housed the Turner-Hutchinson Office.  Built in its place was an office and pharmacy storage area with room left over to make a parking lot for the drug store.

In May of 1988, the Viborg Drug computerized its prescription records to provide prescription customers with much better service.

On December 1, 1990, Viborg Drug pharmacy began to use a state of the art unit-dose packaging system to provide their nursing home residents with safe and efficient medication delivery system.

Viborg Drug became Family Drug, in March of 1992.   Family Drug was based out of Rock Rapids, Iowa.  On March 30th, 1992, it was announced that Bob Sprecher took over as the new Pharmacist.  Sprecher, a 1976 graduate of South Dakota State University, moved to Viborg with his wife, Rhonda and their two daughters.

In August of 1998, Sioux Falls-based Lewis Drug and Sioux Valley Hospital and Health System announced the acquisition of the Family Drug Stores located in 11 cities in Iowa, Minnesota, and South Dakota.  This included the Viborg Store.  The stores were to be operated as Lewis Family Drug.  At the time, Mark Griffin, President and Chief Executive Officer, said that the acquisition was part of a greater plan of expansion for his stores and the services they provide.  Lewis Store was founded in  Sioux Falls over 70 years ago by his father, John Griffin and partner George Fredrickson.

On April 23, 2010 ground breaking took place for the current Lewis Family Drug building, located at 104 West Park Avenue.  After 97 years of providing a steadfast cornerstone of Viborg’s Main Street, it was time to part ways with the past and prepare for the future.  General contractors for the project was Schelling Construction, Inc. of Sioux Center, IA.  The building, a 2,523 square foot structure, was intended to benefit customers with drive up window and automatic sliding doors to the front entrance.  Construction progressed quickly and a grand re-opening and open house was held in the new local pharmacy building on August 13, 2010.

In October of 2014, the community bid farewell to long time pharmacist Bob Sprecher who retired from Lewis Family Drug to join his family in Rapid City, South Dakota.

Thank you to Lewis Family Drug and all the owners, pharmacists and staff who have served our community during the history of Viborg.

The Danish Days Committee would like to extend an invitation to the community to join them in celebrating Lewis Family Drug’s recognition as “2017 Friend of Viborg” with coffee and cake served at the pharmacy on Friday afternoon from 2 – 4 p.m.