The Viborg Volunteer Fire Department is definitely a “Friend of Danish Days”. Not only are they friends of ours, they are also friends of yours. The Viborg department is 40 members strong. They have a total of 30 active members, 5 reservists & 5 junior members. That means in a town with a population of Viborg up to 40 members of your community take up the call when the whistle blows.

n addition to fighting fires here at home, we are fortunate to have 18 members of our local department who have qualified with the Wildfire Fire Training program. This training enables those qualified members to assist with fires such as those that have recently plagued the Black Hills National Forest or similar grasslands. In order to be a part of this program, the individual firefighter has to pass both physical endurance & written tests annually.

When the department is not dousing flames, watching approaching storms, or keeping the department records up to date, they are active in the community. Each year they host Fire Prevention week in coordination with Viborg Public School. Members of the department also conduct yearly finger printing clinics incase there is ever a need to identify a child in an accident. They also support the smoke detector & fire extinguisher give away programs. Moreover, they generously open up their pocket books to help out the Viborg After Prom committee and the Viborg Boy Scout Troop. 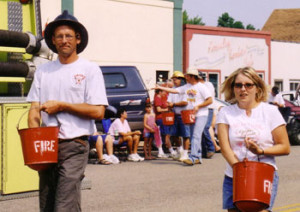 The department does several fundraisers throughout the year. They work in cooperation with the Viborg Jaycees on the annual Turner County Fair Demo Derby as well as their fireman’s dance & of course Danish Days. You can see the results of their hard work and dedication in the most up to date equipment and vehicles. They recently purchased a 2005 Freight-liner Fire Engine. This truck is not only instrumental in fire fighting but also in rescue attempts. They new truck has a mobile light unit that enables the fire fighters to cast light into an upstairs bedroom to rescue a sleeping homeowner or is powerful enough as to light up Viborg’s main street in event of a major disaster.